HEATHER’S BLOG – When you have to put aside your own disability and care for your family……..

HEATHER’S BLOG – When you have to put aside your own disability and care for your family…….. 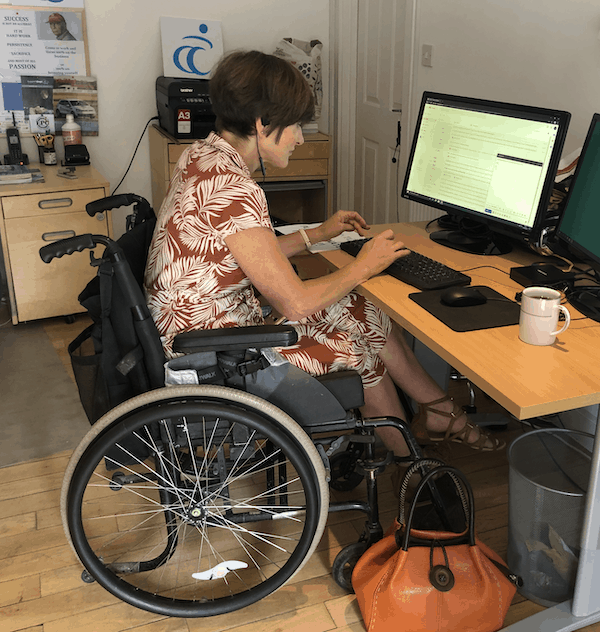 As a regular contributor to Ability Today's blog I have always posted with my wheelchair user's hat on, in order, I felt, to best reflect the interests of my readers.

Putting my best foot forwards I always use my literary version of my best telephone voice when I am writing as a contributor. Ever aware that I am trying to appeal to as wide an audience while still having an angle that has at heart the Ability of my disability so to speak.

So, today's blog will be written with a different hat, a step away from that persona and written from the heart.

I am many things, as well as being a wheelchair user.  I'm a mum, a receptionist, a gardener, a sister, a seamstress and many many more but also, I'm a carer.  And it is this last identity that has kept me very busy in the last few weeks.

My 3 sons have a range of disabilities including social and communication difficulties that fall within the autistic spectrum. My middle son in particular needs regular help from us with his day to day living.

For the purposes of today's blog I will call him Gary.

Gary was born in 1992. His pregnancy was unremarkable apart from two things. At 8 months pregnant I was in a road traffic accident, and two weeks later I went for an emergency scan because he appeared to have stopped moving. We were reassured. He was fine.

He was born at home, planned, and at 6 weeks old we moved house to a new area. The health visitors there were concerned at his lack of weight gain and it was quickly discovered that he was unable to suckle which had the knock on effect of causing me to produce less milk. And so it went on ad infinitum.

We made bottles using sterile plastic bags that could be squeezed and putting hot needles through the teats to allow milk to flow more easily. After a few mistakes he quickly learned to swallow faster and from that moment we became part of the world of disability.

Life became a constant round of measurements, tests and appointments. Specialists, therapists, physios, consultants. For the first five years we were confident that he would be magically 'cured' of his problems if we could just find the root cause.

Over the years we fell into a routine of sorts. None of the local clubs would accept the boys coming for any length of time. They tried everything. Scouts, After School club, Woodcraft Folk, swimming, judo, trampolining always hoping that this time would be different. A few weeks at most and there would be a phone call. Someone got hurt, the leader couldn't cope, there was always a reason why they couldn't come back. So we gave up 'joining' and made up our own club.

We went out as a family. We learned stuff and had adventures that we made up. Treasure hunts, art forays, mud sploshing etc, and all at a time when none of these things were really socially acceptable or desirable. Not locally, don't be silly. We had to live next to these people that already struggled to understand the boys behaviours. We travelled to parks and playgrounds up and down the country. Never returning to the same one in the same month if we could help it and always learning to make a quick exit when the going got tough. Never explain, never complain was our motto.

So, now you have the background, getting back to today.

Gary has difficulties with coordination, reading writing and complex language. That is his primary disability. Moderate learning difficulties. He also has hypotonia, dysplasia, hyperflexy, Crohn's Disease and autistic type difficulties. He also works. Proper paid work, three days a week as a care assistant with a Drama group for disabled adults. And, he lives on his own with help from us and his personal assistant. We are so proud of his achievements.

About three months ago, Gary started complaining of pins and needles in his feet.

We told him to walk around a bit and took little notice, then a week later his P.A. told us he was having trouble sleeping his feet were so bad and it wouldn't go away. The G.P. identified it as possible hand, foot, and mouth disease and he came to live with us for a week while the contagious period passed.

It spread to his hands, as we'd expected, and another week went by. The rash became so sore that he couldn't wear socks or shoes and he was crying out in the night.

At the same time, and I still have to get up and go to work, his benefits have been mucked up by the government agency that is meant to oversee them. Life became, once again, all about Gary.

A month went by and he was still living with us.

The G.P.'s Gary sees are a 30 minute drive away, near his home. That's an hour, plus time for parking, plus waiting to see them,, plus the appointment, plus getting the prescription from the chemist, plus all the phone calls to the various agencies who still seem unable to get the benfits right.

After a month we insisted on a referral to find the cause and the G.P., to his credit, sent it as an urgent referral. However, it still took another month to see a neurologist. A month when he continued to live with us and still couldn't sleep, or walk, or use his hands in any meaningful way. So sleeping for anyone else was also out of the question.

So, here we are, three months on. We saw the neurologist and, predictably, he ordered tests. Tests which have been scheduled but with no sign of the promised follow up to get the results. Meanwhile, to add fuel to the fire, the government appear to be in no rush to get the benefits right which means he is now at risk of losing his home, and he is having to get through each day with the pain, loss of sensation and continual painful tingling in his hands and feet despite the heavy dose of drugs he is now taking to try to control it.

I have been telephoning daily to try to expedite either the hospital appointments, or the benefits agency, or the G.P., or the landlord, or the bank.

All we need now is one more straw and the camels back will break clean in two!