Taking part in a scientific study – Part 2 – by Alex Squire

Taking part in a scientific study – Part 2 – by Alex Squire 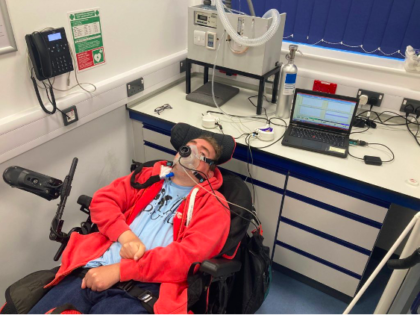 This is the 2nd blog post about the spinal injury Study I took part in. The first post was about the familiarisation trial, and this post will be about the main trial.
The main trial
For the main Spinal injury Study, I had to be up bright and early to get to Loughborough University’s Centre for Sport and Exercise Science at 9 AM. I was told to be well hydrated, so I made sure I drank a good amount during the 24 hours beforehand. Plus, I didn’t eat anything for breakfast on the day of the trial either because I would be given breakfast later.
I was met by Jordan Fenton, a PhD student who was running the trial. The first thing I had to do was provide a small urine sample to make sure I was adequately hydrated. Good hydration was important not only because it’s healthy but because it would help with one of the tests. My body composition needed to be calculated using a technique called Bioelectrical Impedance Analysis (BIA). I’ll explain more about this later.
Following the urine sample, Jordan calculated my resting metabolic rate – the number of calories I burn just by doing nothing. To do this, I had to wear a tight rubber face mask with a tube attached to it, and a machine collected all the carbon dioxide and oxygen I breathed out over 30 minutes. I reclined my chair to get as laid-back and comfortable as possible.
Using the gases that I breathed out, Jordan could work out my resting metabolic rate. This part of the trial was quite a novel experience but not a particularly exciting one. I was just lying there staring at the ceiling for half an hour whilst my breath was collected.
After this came the Bioelectrical Impedance Analysis, where my body composition was calculated. To do this, Jordan placed electrodes on the back of my hand and on my foot, and a small electric current then passed through my body. Water conducts electricity so being well hydrated helps the test to work correctly.
Then using mathematical magic, my body composition can somehow be calculated. However, at the time of writing, I don’t yet know the results. Jordan did say that he would let me know all the results when they were ready, though.
Breakfast time
Next, it was time for breakfast! I was taken to a room where I was given a bowl of porridge and honey to eat, and I found it very tasty.
The porridge went down a treat because I was starving by this time as I hadn’t eaten anything. Following the porridge, I had to fill out a thick wad of questionnaires about my eating habits. Most of these were selecting answers on a scale or multiple choice.
The day involved a heck of a lot of questionnaire filling out, which I found a bit laborious, to be honest.
Every half an hour after the porridge, I had to fill out a questionnaire asking how full I felt, how satisfied I was, how much I could eat, and how nauseous I felt.
After filling out the masses of questionnaires, Jordan gave me a little tour around the building, and I saw some of the labs. I also saw the Peter Harrison Centre for Disability Sport, where Paralympian’s come to train.

In this centre, they had cameras for capturing body movements whilst running or wheeling. And they also had a treadmill for wheelchair users, which was interesting to see.
Following the tour, I went back to the room, and I had some free time, so I did some reading on my phone for a couple of hours. This was punctuated every half an hour by another questionnaire that I had to fill out.
I had to wait in the room for several hours, mostly just filling out questionnaires. It wasn’t until about 3 PM that I was given a large bowl of pasta and told to eat until I felt full.
However, before the pasta, I had to fill out a food preference questionnaire on a laptop. This showed pictures of 2 foods side-by-side, and I had to indicate which one I preferred or how much I wanted to eat them.

I had to do this questionnaire before and after I ate the pasta to see if there was a difference in what foods I wanted to eat when feeling full and when hungry.
I managed to eat about half of the bowl of pasta, and I was feeling pretty stuffed. I took the leftover pasta home in a Tupperware container to save it from going to waste.
After the pasta, I did the food preference questionnaire again, and then there were a few more questionnaires to do a bit later on.
Conclusion
Taking part in a scientific study was an interesting experience and one which I'd never done before. It was quite a long day, and there was a lot of waiting around and filling out questionnaires. This got a bit tedious after a while if I'm honest. But, hey, that's science. It's not all explosions and excitement. Hopefully, I've helped to further scientific knowledge a little bit in an important area, and I'm looking forward to getting the results of my body composition and resting metabolic rate. That could be useful with my dieting efforts.
Thanks for reading!

PrevPreviousHayley lives with neurofibromatosis. She has learnt to 'breathe' through the pain caused by constant tumours – ABC
NextSpine injury patients 'abandoned' by NHS mental health as a third of sufferers consider suicide – Daily MailNext