Taking part in a scientific study – Part 1 – by Alex Squire

Taking part in a scientific study – Part 1 – by Alex Squire 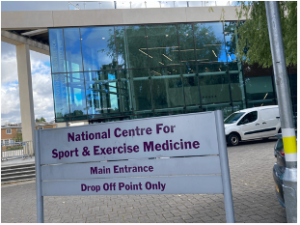 Recently a family friend forwarded me an advert which said that spinally injured participants were needed for a scientific study. The study looks at the cognitive factors influencing what people with spinal injuries eat and how it differs from able-bodied people. It's an important subject area as spinally injured people are more prone to obesity than able-bodied people.
I’d never taken part in a scientific study before so I was intrigued. The study wasn’t paid but the prospect of learning my metabolic rate and body composition was tempting. So I decided to participate in the study which was held at Loughborough University and run by PhD student Jordan Fenton.
This will be the first of two posts about this Spinal injury trial as it will take place on two separate days – firstly, a familiarisation trial on one day and the main trial on the other. So on 16 September, I went to Loughborough University's Centre for Sport and Exercise Science for the familiarisation trial. I was met by Jordan, who was carrying out the study, and he explained its aim and what was going to happen.
The first thing I had to do was read through and sign some consent forms to make sure I understood and agreed to what I was getting myself into.
Next, Jordan measured my skin folds – which is probably a sentence I have never written before.
The skin folds on the back of my bicep, tummy, belly, side, and back, were pinched and then measured with callipers.
It was a novel experience!
Next, it was time for lunch. I was instructed not to eat anything 3 to 4 hours beforehand because I would be given something to eat. I was taken into a room and presented with a massive container of tomato and cheese pasta.
I was told to eat as much as I could until I felt full. The pasta tasted quite nice and I think I managed to eat about 1/3 of the pasta, but there was a lot of it.
Finally, I was shown a type of questionnaire on a laptop that I would have to do in the main trial. This was called the Leeds food preference questionnaire.
I was shown a series of pictures of two foods next to each other, choosing which one you prefer. In the main trial, I will need to do the questionnaire before and after eating the pasta to see the difference my fullness has in how appealing I find certain foods.
The familiarisation trial lasted one hour, but the main trial will last for about 6, beginning at 9 AM.
So stay tuned for the next post to learn about how I got on!