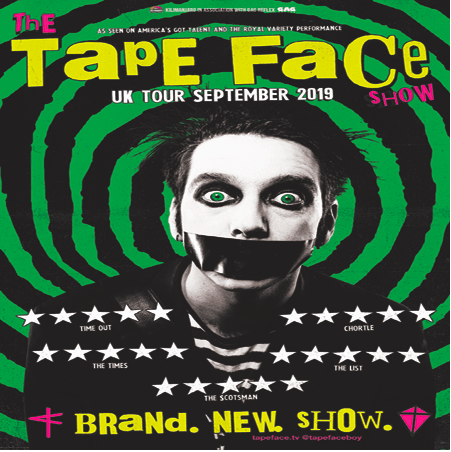 TapeFace at Camberley Theatre was really exciting and fun. It was easy to get in as the theatre has a ramp built outside it which goes straight to the doors. And inside the main foyer is all nicely smooth and flat, our seating was on the front row and we were really lucky as my partner Ollie got to go on stage and support TapeFace himself! Ollie had 3 other strangers on his lap! It was hilarious.

I’ve been to Camberley Theatre many times and it has great access with the ramp outside that gives you access to the building. The toilets are big and accessible – you might have to go to the bar staff to ask to get the Radar key but other than that it’s good. If you have a personal radar key that does make things a lot easier.

TapeFace (for those who don’t know, check him out on Youtube with America’s got talent performance) did his thing – he was preparing to do a tightrope walk between two chairs weighed down by the men on the chair. It’s really interesting to have a man who won’t talk making other people do things with nothing more than his eyes. He had clearly done his research with old clown shows. TapeFace acquired with his torch people’s feet and footwear and he found a pair on a guy in the middle of the front row and took them onto stage and put them in a box.

He had a phone on the stage that would ring and he would answer playing Through The Loop by Pendulum. And then he would hang up and shrug and get on with the show. Weird and existential to say the least but also thought-provoking and funny.

After that he got 2 female members of the audience to help him play tetherball, with himself as the pole! He had someone in the audience stand up and do a dance. He got a couple of guys to stand up and fire a plastic gun at a target on stage. It was so funny because these people obviously weren’t plants and had no idea that they’d be asked. The culmination of the show was a load of haze effects and Tapeface hung a Kite on a line and flew it above us. Simple but effective a real work of art.

It was a really fun 2 hour show and it was crazy seeing how he used his eyes and sounds to captivate an audience. I would recommend it for anyone of any age or language or ability as everything is purely physical.

For more information on Tape Face or Camberley Theatre please see links below:

What exactly is MS and is there a cure? - Telegraph.co.uk Next post

My Quarantine Routine: Nicholas, a 23-year-old living with autism – Metro.co.uk