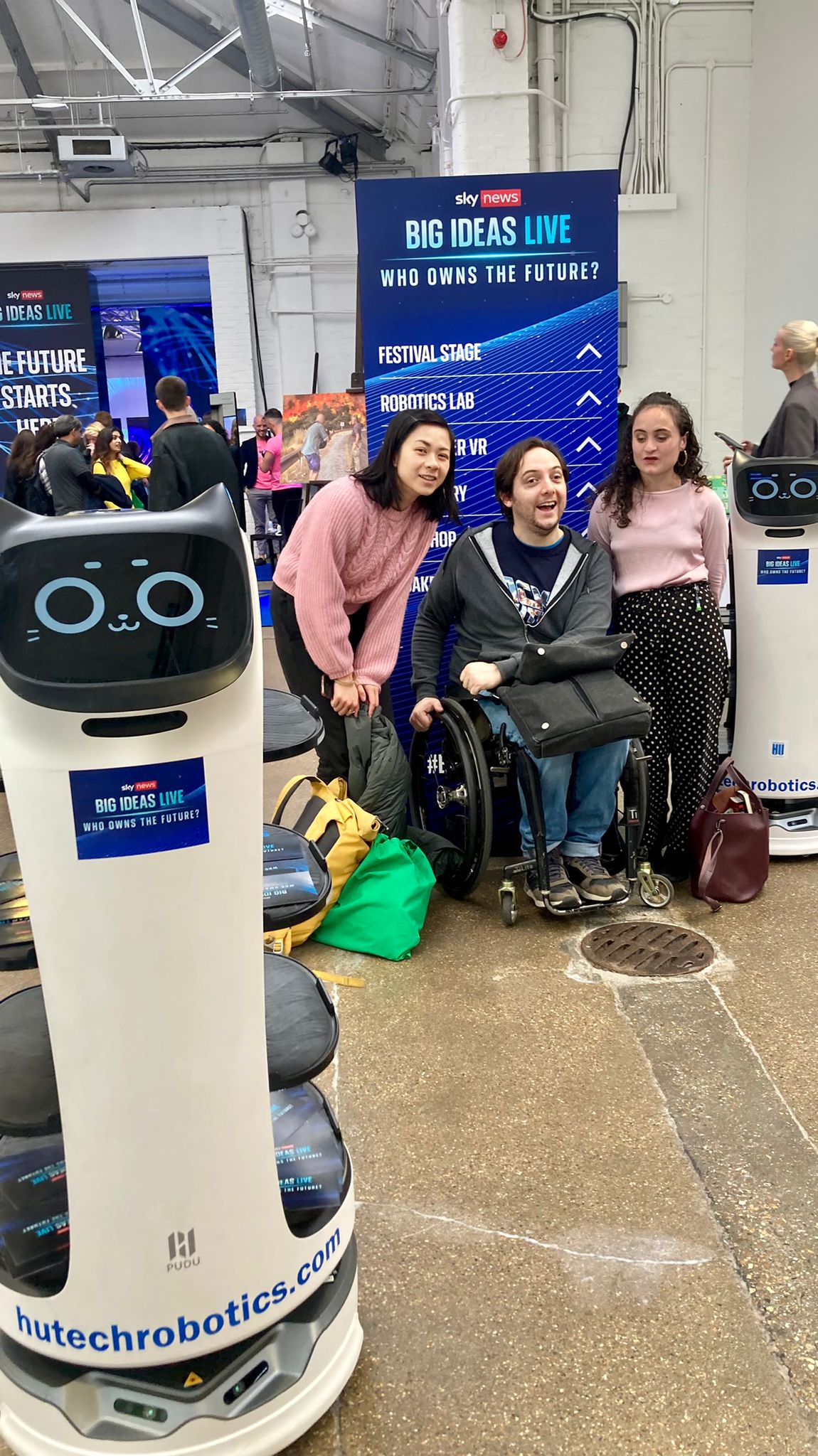 What does the future hold? And more importantly, who owns it? These two big questions are
central to the Big Ideas Festival, hosted by Sky at Protein Studios, East London. The 2022 festival
presented a variety of discussions, debates and demonstrations aimed to bring the future to the
present day, whilst stimulating the mind.

The first glimpse of the future came as soon as we entered the ‘Backstage’ area, where we were
greeted by robot cats designed by Hutech Robotics, who moved around autonomously, interacting
with guests and distributing flyers and snacks, whilst cooing at being stroked. This area was focused
primarily on lifestyle, food and drink, with examples such as Matcha sodas, Virtual reality speed
dating, and next-gen coding. Particular focus was given to Redefine Meat, which served a 3D-printed
plant-based alternative to meat backed by Marco Pierre White, which proponents argued could
revolutionise how we approach food. All in all, this had the desired effect of going into the future –
without needing a time machine. There was a cute moment where I posed for a selfie with
journalism students Kim To and Lauren Lethbridge – and one of the robot cats photobombed us. In
another exhibit, we saw a four-legged robot used by the UK Atomic Agency used to clean up
decommissioned nuclear power plants – which moved like a hybrid between a dog and a horse.
We listened to many of the discussions, many of which were thought-provoking. Particular interest
to me was a discussion on “Medical technology and the future of healthcare,” with surgeon and
inventor Dr. Owase Jeelani (Great Ormond Street) and mathematician Sir Peter Donnelly (Genomics
PLC), who were explaining about pioneering surgery being carrying out by surgeons operating
robots, at great distances, allowing them to work remotely. Other, more normative discussions
included “Can AI replace your brain” with neuroscientist Anil Seth and Chris Bishop from Microsoft,
and “Can machines have feelings?” with former Google employee Blake Lemoine, between them
blurred the lines between humanity and computers.

Some of the debates I found to be more pressing, however. One of the biggest strengths of Big Ideas
is that it provides a platform to debate the future safely in a structured environment – which is much
more difficult to do online. Indeed, many of the debates revolved around these issues, such as “Can
we create safe spaces online?” “Moderating Media” and “What’s the future of big tech?” as big
technology intersects with society, politics and ethics, which is best illustrated by Elon Musk’s
takeover of Twitter – and the chaos surrounding it. This raises the uncomfortable question of
regulating big tech: Can we? Should we? If so, how?

I found the festival to be very stimulating – almost too stimulating for my neurodivergent brain.
Looking for a place to rest and collect my thoughts, I got the chance to explore nature with a VR
headset, through the art piece Treehugger Wawona by London-based artist collective Marshmallow
Laser Feast, where I got to explore the base of a giant sequoia tree up-close. This allowed me to get
a sense of grounding in a virtual way, something I hadn’t really experienced since playing the video
game Sky on my Switch.

But it did bring up a worrying doubt in my mind – how accessible was the future? While the venue
was wheelchair accessible, there was no sensory room to rest my brain. Access for d/Deaf people
was mixed – while there were onscreen subtitles, there was no BSL interpretation. And the Redefine
Meat looked very appetising – but I wasn’t able to eat it, as I’m allergic to wheat and gluten. This did
made me consider – will we be able to use this new technology to make the future more accessible for everyone, or will we end up creating new barriers? And it’s not just a question of disability, but
capability – how can people access this technology if they’re not tech-savvy?

Perhaps there are more immediate fears to consider – How will Britain face its future? Ever since
Brexit, the UK has been struggling to find its place in the world. Now cut off from sources of
European funding, what does UK science have to offer? How can it compete against scientists from
North America, Europe and Asia? If the UK cannot answer these questions well, then everything we saw will just remain – ideas.