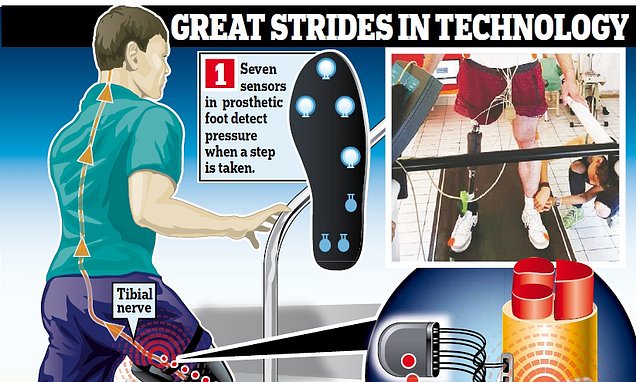 Scientists have created a prosthetic leg which amputees can really feel.

While prosthetic limbs are far more advanced than in the 20th century, their major flaw is that they are not really part of someone’s body.

Amputees cannot feel them, so are at constant risk of falling, needing to concentrate and must keep an eye on the leg’s position at all times.

Now researchers have solved the problem, allowing people to feel every time their prosthetic foot hits the ground or knee bends to walk.

Their new prosthetic leg does this by sending electrical signals to four electrodes surgically implanted into the tibial nerve in someone’s thigh.

The nerve would normally pick up feeling from the foot and lower leg, so can be hijacked to do the same for a metal leg and rubber foot with eight sensors attached. 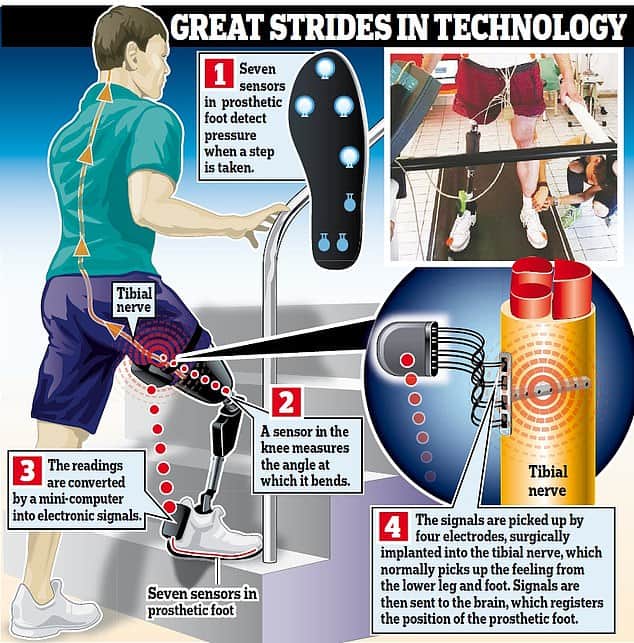 The leg has been found to work three people with above-the-knee amputations, who were able to climb stairs 30 per cent faster and avoid tripping over unseen obstacles.

Djurica Resanovic, one of the amputees, who lost his leg in a motorcycle accident, said: ‘After all of these years, I could feel my leg and my foot again, as if it were my own leg.

Professor Stanisa Raspopovic, who led the study from ETH Zurich said: ‘When prosthetics do not work properly, people fall and suffer severe injuries.