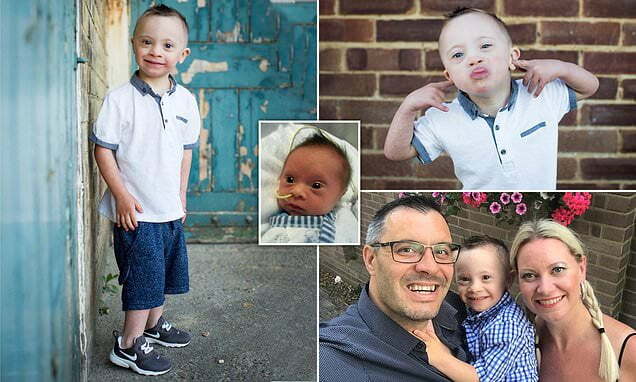 A four-year-old boy with Down's syndrome dubbed 'Smiley Riley' by his parents has been melting hearts as a model for brands such as Mothercare.

Stuart and Kirsty Baxter, from Rochester, Kent, initially feared how their son Riley would be treated by the world after being diagnosed, worrying that people would see his disabilities rather than his abilities.

But after joining support groups, they have been amazed not only by Riley's progress, but also society's too - with everyone adoring their son.

'We have called him "Smiley Riley" from a young age, because he makes people really happy, and seeing his smile gives people a pick-me-up on a bad day,' Stuart said.

After someone suggested Riley should start modelling, he joined Zebedee Management, where he has already flourished, quickly becoming the face of a Mothercare advert, the Jools Oliver Little Bird range and more.

Living up to his nickname, Riley has perfected his heart-warming smile and shows off his natural charm in photoshoots, earning him modelling contracts and the adoration of his classmates.

Sales manager Stuart, 40, said: 'After we were told he had Down's syndrome I cried, not because I would love him any less, but just knowing how cruel the world can be.

'That was the first thing that went through my mind but obviously my perceptions were wrong, and wow how wrong I was.

'There was the fear of the unknown and why this had happened to us, but if I knew then what I know now, I wouldn't have been upset at all.