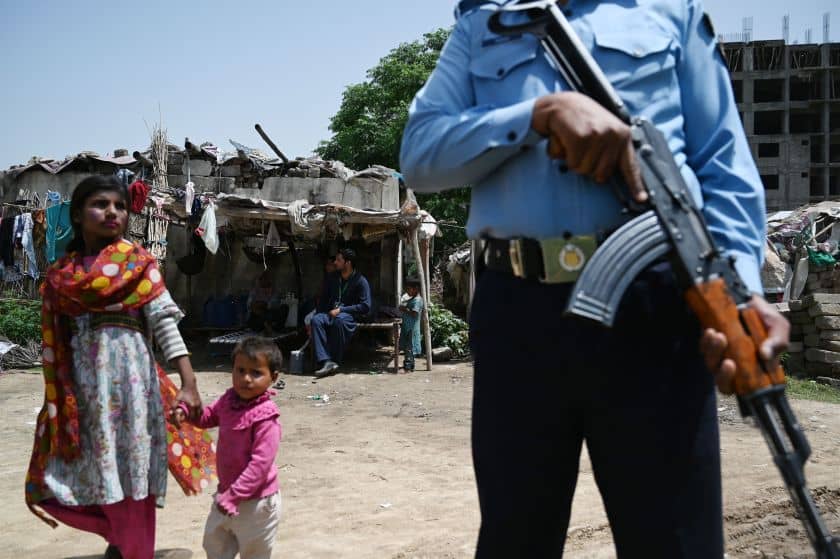 A Pakistani policeman stands guard as health workers carry out a door-to-door polio immunization campaign on the outskirts of Islamabad on April 26, 2019. (Aamir Qureshia / AFP/Getty Images)

An anti-vaccination movement rooted in suspicions of modern medicine. Unsubstantiated rumors fueled by social media. Children infected with a disease that had been all but wiped out.
Polio is making a troubling comeback in Pakistan, and it is being driven by some of the same forces spreading measles in the United States.

Two years after health officials declared they were on the verge of eradicating the crippling childhood disease from Pakistan, one of the last countries where it remains endemic, at least 58 children here have tested positive for the virus since January.

That is nearly five times the total of all of last year, and the most in a calendar year since 2014 — a major setback for a $1-billion-a-year global eradication campaign.

Some 2 million Pakistani households have refused immunizations for children since April, when reports circulated on television channels, Facebook and Twitter that children had fallen ill after a vaccination drive at a school in the northern city of Peshawar.

None of those adverse reactions were serious enough to require hospitalization, according to health officials. But the rumors revived long-standing myths about the dangers of vaccinations in Pakistan that the decades-long eradication effort has fought to dispel.

Opponents of the Pakistani government are also using the vaccinations as a political tool to put pressure on the new prime minister, Imran Khan.