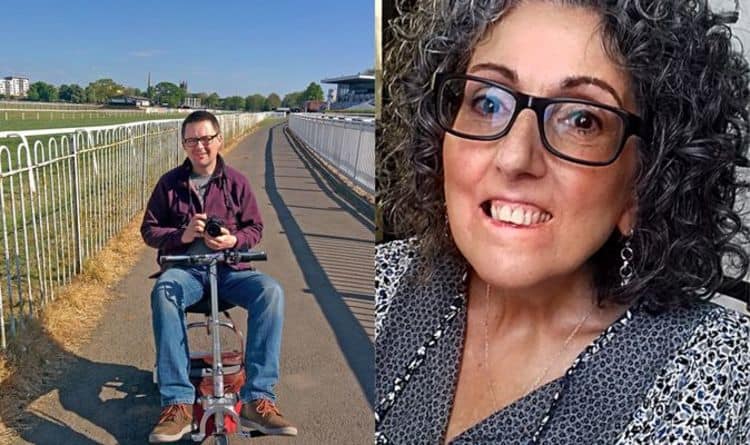 The two, who have the same illness as Professor Stephen Hawking, are part of a group exhibition, Art Beyond Limits, at the Oxo Tower on London’s South Bank this weekend. They are selling their artwork to support the MND Association as it celebrates its 40th anniversary with a series of events across the country. Like Professor Hawking, Sarah Ezekiel and Miles Pilling “won the lottery of MND” by having the variant that allows them to live longer. Motor neurone disease affects the brain and spinal cord causing muscles to weaken, stiffen and waste away. It is known as the 1,000-day disease as most sufferers die within this timeframe of its onset.

Around 5,000 Britons of all ages are affected, with six diagnosed daily.

But because the condition is so rapidly fatal the public do not see survivors and it is not as well known as diseases such as multiple sclerosis.

Art graduate Sarah hopes to change that through her work – created through the use of Eyegaze technology which allows computers to be controlled with the eyes.

She began suffering slurred speech and weakness in her left arm but it was only when pregnant with her second child that she was diagnosed with MND in 2000, aged 34, leaving her unable to care for her children .

Now one of the world’s leading Eyegaze artists, Sarah, 53, from Hendon, north-west London, says: “I was devastated I couldn’t create anything and never thought I would again. Eyegaze proved me wrong and I’m so happy I can paint and draw, although it’s much more difficult and slow. I still can’t believe I can paint with my eyes! Many of my pieces express my feelings about life with MND and it’s wonderful to be able to convey my feelings creatively. It also makes me happier if I’m feeling low.”

She hopes the exhibition will “raise more awareness, which I’ve always believed will lead to a cure”.