Mother-of-two, 51, is living on a knife-edge with rare genetic condition – Daily Mail

Mother-of-two, 51, is living on a knife-edge with rare genetic condition – Daily Mail 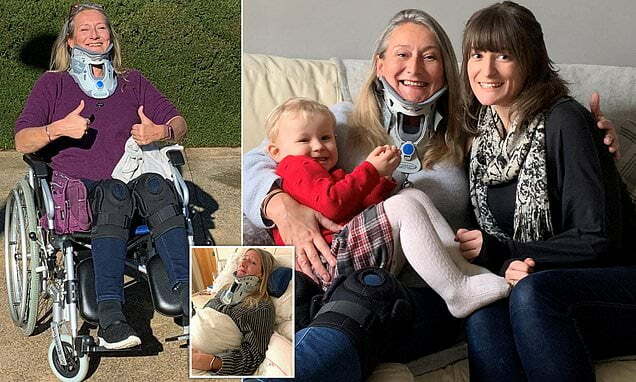 A successful businesswoman has been left terrified after being diagnosed with a rare genetic condition that means she could be 'internally decapitated' at any time.

Mother-of-two Karen Scott was diagnosed with craniocervical instability in January 2019.

Ever since, the married 51-year-old has been living on a knife-edge and is unable to leave the house without a neck brace or wheelchair.

The finance director, from Hartfield, East Sussex, had to quit her job as a company director three years ago after the condition - which she claims took her a lifetime to diagnose - left her in agony.

'It hurts my entire body, the pain is horrendous.

Karen first discovered she had the illness after also being diagnosed with Ehlers-Danlos Syndrome, which can cause craniocervical instability, in May 2018 in London.

EDS is a condition which affects the connective tissue which holds muscle, bone and organs in place.

Karen suffered from poor health throughout her 20s and would routinely dislocate her joints.

But she claims she spent years visiting GPs who finally diagnosed her with Myalgic Encephalomyelitis (ME) in 2003 - but did not discover the true cause.

She said: 'My health has not been good since the age of 23. In 2005 I was bedridden for six months

'For years I was ill, I had a knee that regularly dislocated and when I was 23 I had a virus and didn't really recover.

PrevPreviousDisabled model Samanta Bullock on how to love your body – Disability Horizons
Next22, who lost the ability to speak after a crash talks in his native Black Country accent – Daily MailNext