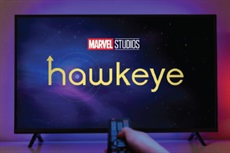 Hearing loss and deafness play a central role in Apple TV+’s new family miniseries El Deafo, a TV adaptation of Cece Bell’s award-winning graphic novel originally published in 2014. In this charming and insightful three-episode series, Bell narrates her experiences as a four-year-old deaf girl in the 1970s and ‘80s, when hearing loss and deafness were less readily accepted than they are today. 1 The animated series explores Bell’s understanding of her deafness by imagining herself as a superhero called “El Deafo” to help her overcome various social challenges, such as bullying by her peers. Indeed, this series reflects a recent trend; portrayals of individuals with hearing loss and deafness in popular media have become increasingly common in recent movies such as A Star is Born, Sound of Metal, and CODA. One recent television show, Marvel Studios’ Hawkeye, highlights Clint Barton, a master archer with noise-induced hearing loss from significant noise exposure after many battles as a member of the superhero group The Avengers. A large proportion of these movies and television shows focus on hearing loss as a central element of the plot.