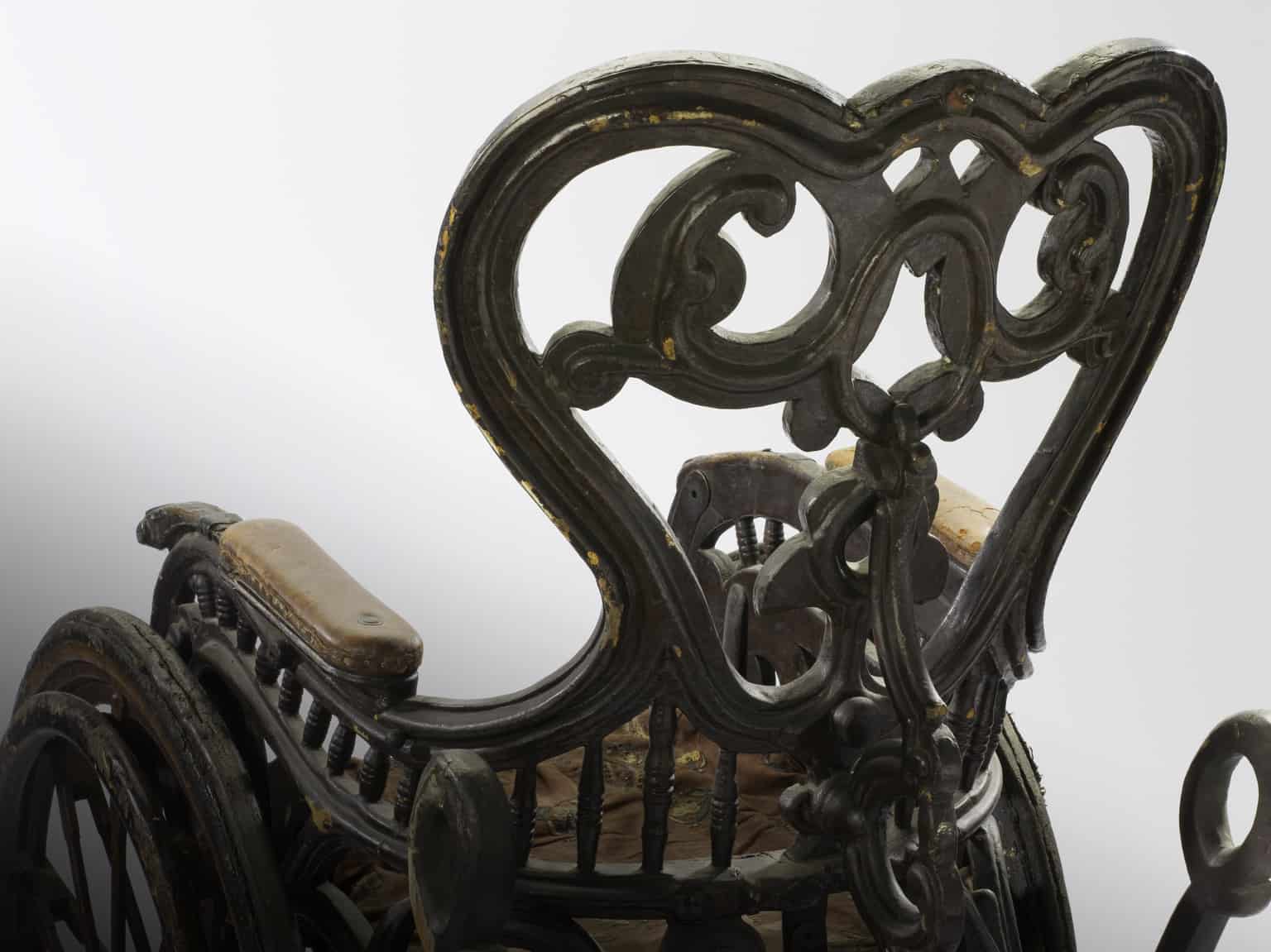 To celebrate International Wheelchair Day on the 1st March, Research Fellow Kay Nias explores the history behind what has arguably been the most important mobility device in history.

The wheelchair is a piece of technology that we are all familiar with, used by millions of people with disabilities around the world.

The history of the wheelchair shows us how technological advancements have been driven by the changing demands, circumstances and ingenuity of wheelchair riders throughout time.

When was the first wheelchair invented?

While it is uncertain as to what can be considered the first wheelchair, stone inscriptions from Ancient China and Greece suggest that wheelchair-type furniture has been used at least since the sixth century AD.

Perhaps one of the best-documented early examples, however, was made by an unknown inventor for King Philip of Spain (1527-98), in 1595, who in his later years suffered from severe gout which made walking difficult. This chair was elaborate in its design with plush upholstery, arm and leg rests, and four small wheels which meant that he (conveniently) needed to be pushed around by a servant.

The first self-propelled wheelchair was invented in 1655 by paraplegic clock-maker of Nuremberg, Germany Stephan Farfler (1633-1689), who built his own mobility aid when he was only 22 after having broken his back as a child.

Using his mechanical expertise as a clock-maker, Fafler’s wheelchair frame was based on a three-wheel chassis and worked by turning handles attached to a geared front wheel using a system of cranks and cogwheels.

While it wouldn’t be for another few hundred years until the invention of the bicycle, it is easy to see this wheelchair as a forerunner.

The Science Museum Group has an interesting example of a self-propelled chair inspired by Fafler’s design in its collection. Built in Britain between 1910-1920, this chair has three main wheels and driven via chains by two hand cranks either side of the rider.

From the second-half of the eighteenth century a number of important wheelchair developments occurred in the town of Bath. At this time Bath was a popular spa town destination for the sick and disabled from across Britain and Europe who sought comfort and healing from the mineral waters and physical therapy offered there.

To meet the demand created by immobile visitors wishing to take the waters, a number of wheelchairs were designed and became available to rent. The most popular design of this period was that of John Dawson whose 1783 ‘Bath Chair’ was a model supported by two wheels joined by an axle underneath the seat, with a small pivoting wheel in front of the supporting footrest.

The Bath Chair could be steered by the rider via a long curved rod connected to the front wheel, though it still had to be pushed by an attendant. Variations of the Bath Chair quickly became very popular and soon rivalled the Sedan chair (an enclosed box with a seat carried on poles by two men) as a form of transportation for wealthy disabled people across Britain. The Science Museum Group Collection even has a Bath Chair made for Queen Victoria in 1893 for her later, less agile years.

Patents show that throughout the nineteenth century many improvements were made to the wheelchair to promote comfort, manoeuvrability and independence, including the invention of rear push wheels and push-rims.

Perhaps the most commercially successful wheelchair to be marketed was the revolutionary ‘X-frame’ folding wheelchair. Developed in the 1930s by American engineers Harry Jennings and Herbert Everest – after the latter became paraplegic in a mining accident – the relatively lightweight and easily transportable chair is still familiar today.

The Science Museum Group Collection has a ‘Model 8’ version of this folding wheelchair built in the 1950s. Used in hospitals, nursing homes and private institutions, the Model 8 could be manoeuvred either by the patient via the metal rims attached to each wheel or by an assistant pushing the chair.

Unprecedented advancements in manual wheelchair technology have been witnessed since the 1930s with materials such as aluminium and titanium making devices much lighter than older steel versions, and with the advent of athletic models specifically adapted for sports performance.

The ‘Shadow Racer’ sports wheelchair for example, was designed for track and road racing by Jim Martinson, an injured Vietnam veteran. Manufactured by the company Quickie Designs in the early 1990s alongside tennis and basketball chairs, the development of sports wheelchairs highlights the role of personal ambition driving technological adaptions and advancements.

Today the wheelchair is one of the most commonly used assistive devices for enhancing the personal mobility of people with disabilities. Considered a basic human right for people with limited mobility by the World Health Organisation, it opens up a world of independence and enables participation in social, economic and cultural life.

International Wheelchair Day is a welcome moment both to celebrate the innovative technological advancements which have changed the lives of millions, but also to consider the reality that throughout history – as is still the case today in most developing countries – only the privileged few who need wheelchairs actually have access to them.