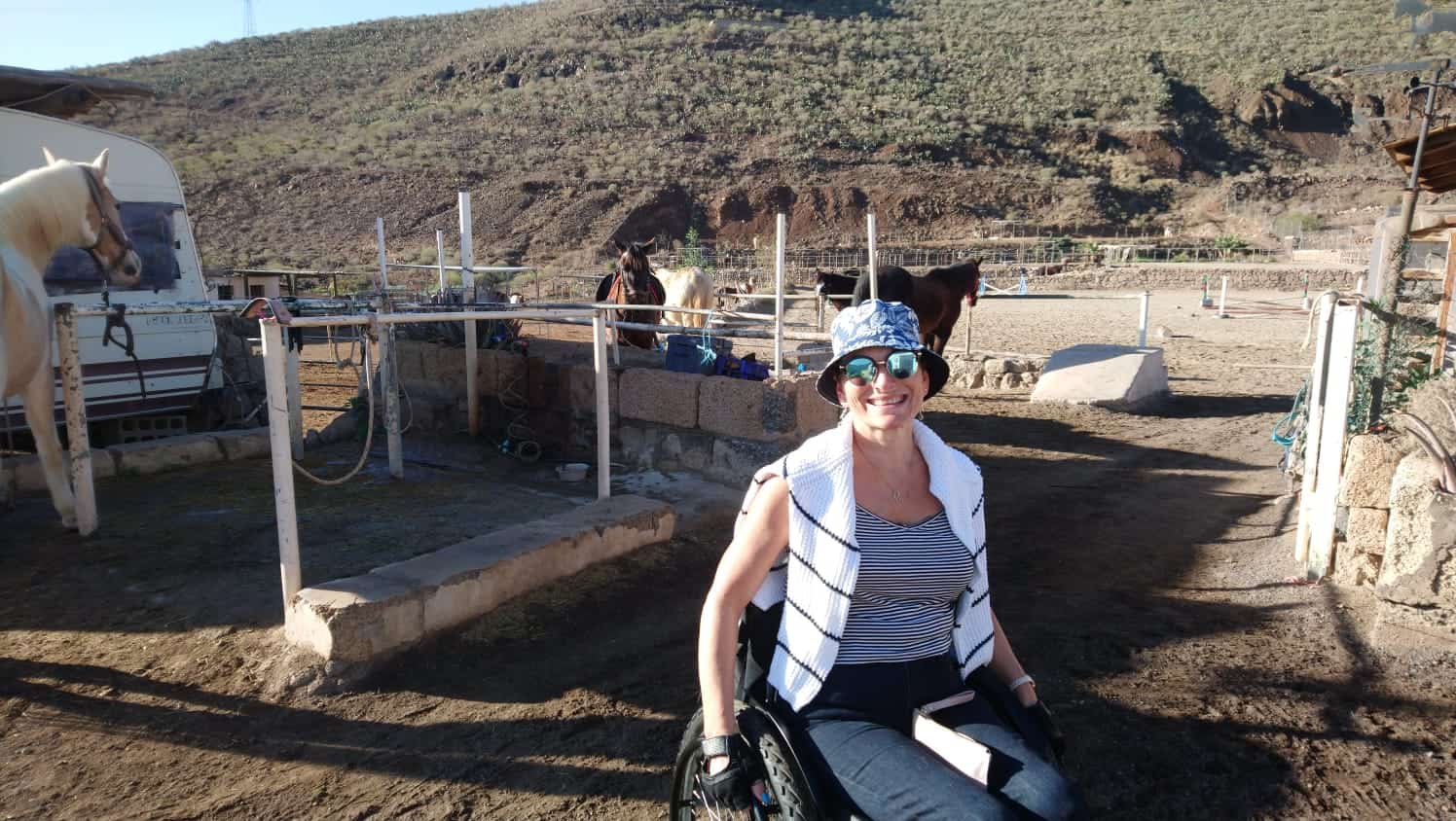 Last time I talked about the experience of travelling by plane to our holiday destination with a wheelchair so today I thought I would write about the actual holiday and benefits of having a wheelchair in an unfamiliar hilly landscape.

We arrived at Tenerife South around midday and whilst the rest of the passengers disembarked, we settled in to wait for my chair to be brought up to the plane. We always do this as, although I am perfectly able to transfer in the luggage hall, I find people staring is embarrassing so we wait. After a short while we were joined by the airport staff who were to assist and once again wheeled through the plane and transferred into my chair at the plane door. Once in my chair I am independently mobile once again so, although we were offered help at every point by various staff, we made our own way through customs to baggage hall and on down to the taxi rank.

Once at the rank my very basic Spanish comes out to play. My new chair is not of the folding variety. This means, for those who are not familiar, that it is very much lighter for me to push but it doesn't fit into a saloon car's boot. The wheels come off easily and the back folds down and the frame is super light so a hatchback would probably be OK and estate cars are fine etc. My Spanish vocabulary includes the word for wheelchair (silla de roudas) beer or Sangria (cerveza o Sangria) and not much else so when the concierge at the rank hailed an accessible vehicle without asking first, we breathed a sigh of relief.

I love using my limited Spanish. It gives me a real buzz when I can make myself understood and even more so when they reply as that means they think by my accent that I am proficient enough in Spanish to continue the conversation further without using English. This is doomed to failure when inevitably we grind to a halt as my gormless bewildered expression gives away the fact that I'm quoting directly from Google translator.

The driver dropped us at the apartment block where we were staying at the top of the hill and with trepidation, we scoped out the building for access. Some places where we have been assured of step-free access have proved to be diabolical nightmares. Thankfully this time there was ramped access all round and no steps at all in or out of the apartment. All the floors were of the tiled variety making manoeuvring a breeze and once the furniture was pushed aside, we headed out once again into the warm sunshine to find refreshments.

One of the highlights of staying at the top of the hill in a wheelchair is the journey downhill in every direction to the various beaches. No matter which beach we travelled to there was a lovely downhill glide to get there on tiled pavements that, whilst lethal in the rain for pedestrians, provide a superb ride for the kamikaze minded.

In fact, on one memorable glide down the hill, I got all the way to the ramp at the top of the beach without pushing once and hit the boarded walkway at some speed only to hit the raised lip I hadn't noticed and be catapulted across the sand missing the walkway completely. Thankfully I landed on the soft sand, albeit in a crumpled heap, and mostly undamaged unless you count the considerable loss of dignity and pride.

My husband was crying with hysterical laughter having realised by my loud cackling that I was fine, and we retreated amidst laughter and applause to a nearby bar to gather beer, Sangria and snacks and moved further along to a beach where the sunseekers had not seen my fall from grace.

Of course, whilst the downhill is great, the trouble with hills is that there is no way of avoiding the going back up at the end of the day which is not quite so much fun. So this is where the abundance of restaurants and bars in tourist areas comes into their own. The coastline of Southern Tenerife has a coastal path that runs for many miles through the towns of Los Christianos and Playa De Americas and on to the many beaches of Costa Adeje. We only have to travel as far as the next meal or bar at each time and we use the evening meal as an excuse to trundle the coastal path to the point nearest to our accommodation then hop from bar to bar until we are just a short hop back to where we started the day. at the top of the hill.

Whilst we were in Tenerife we decided that we would fulfil a long held ambition of mine to ride horses, and therefore to be able to travel off-road and off the beaten track. We eventually found a stable that was willing to have a go at getting me up onto a horse and the following day we booked a cab and travelled inland to the foothills.

The stables were owned by an English couple so that made explaining the situation a whole lot easier and I had pre-warned them that although I would turn up in a wheelchair, I am able to stand and take a couple of supported steps if necessary. We came to an agreement that if I was to fall off the horse, which was a definite possibility - more likely than not actually - any injury would be my own fault and I had to sign to relieve them of all culpability.

In the yard there was a large square concrete block that children use to mount their horses and I was lifted onto it from my chair while my horse was manoeuvred alongside, then, with my husband one side, and the owner the other, I was lifted and shifted until I was up there astride the beast and hanging on to the saddle for all I was worth. It was every bit as amazing as I had dreamed it would be.

We had initially booked for a short ride, not expecting to even be able to hang on and balance for that long, and after the first short circuit around the yard, and shortening my stirrups to enable me to be more steady, we headed out into the hillside proper. I had not anticipated the rolling movement of the horse that threatened to unseat me every few steps, nor the need to be able to use my legs to steer etc. Fortunately, the horse was very calm and obviously knew the way, so I gave up trying to 'do' riding and just enjoyed the feeling of being equal to all the others around me taking the ride. And I didn't fall off.  In fact, we extended the ride in the end so that in total I was able to stay mounted for an hour and a half in total.

It all seems such a long time ago now that I am planning another trip very soon and I am determined to find stables in my local area that will allow me to occasionally ride. Even if it's only once a month.

Don't ever allow other people's lack of imagination prevent you from doing what you dream of.