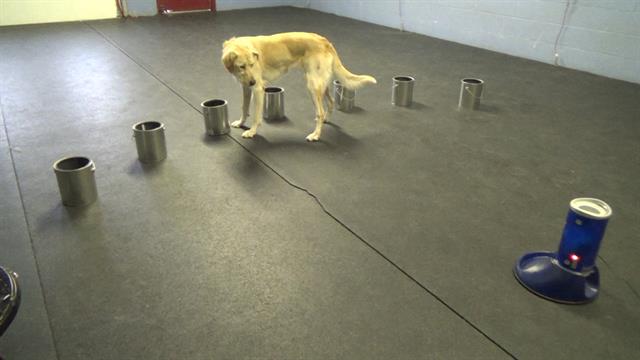 DOGS’ MIRACULOUS SENSE of smell allows them to do many things that no human technology can achieve, such as sniffing out drugs, explosives, and even diseases like cancer. Dogs are trained to respond to and even sense epileptic seizures before they occur—though effectiveness varies widely, and there’s been little solid scientific evidence that such a thing is possible. Further, it hasn’t been understood how dogs might be capable of such a feat. Could it be subtle alterations in behavior, movement, or some odorous giveaway?

A new small study suggests that humans emit a specific odor during epileptic seizures that some dogs can recognize.

In a paper published Thursday in the journal Scientific Reports, researchers took sweat samples from seven patients with different types of epilepsy across a range of activities, such as resting, exercising, or having a seizure.

The scientists then placed the sweat samples in cans and showed that five dogs could be trained to recognize which one contained the samples collected during epileptic seizures.

This is the first time that it’s been shown in a published study that humans do emit some odorous chemicals during epileptic seizures, ones that dogs can pick up on. The paper opens the door to future tests or training approaches that might allow dogs to better respond or even sense seizures before they progress, says study lead author Amélie Catala, a doctoral student at France’s University of Rennes.

To be clear, this study uses samples taken during a seizure, not before, and has not identified what these chemicals are or at what point they are released.

“Studies like this are important, to provide a sound scientific foundation for the true capabilities of canines sensing seizures,” says Kenneth Furton, a chemistry professor at Florida International University not involved with the paper who has studied dogs and their olfactory detection abilities.