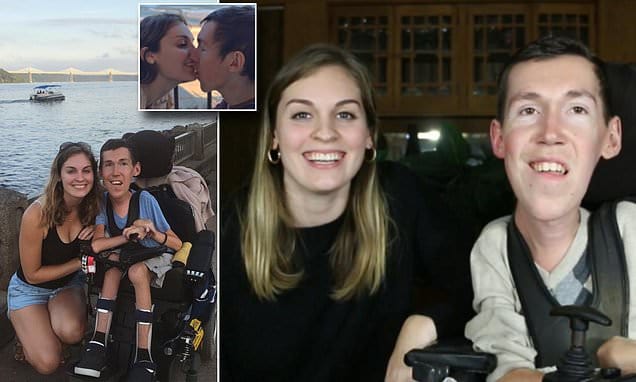 A disabled man who uses a wheelchair and his able-bodied girlfriend have documented their relationship in inspirational videos to help break the stigma of those with disabilities.

Shane Burcaw, 26, from Pennsylvania was born with a neuromuscular disease called Spinal Muscular Atrophy (SMA), and he has used a wheelchair since the age of two. Three years ago, he received a message from his now-girlfriend Hannah Aylward, 23, after she watched a documentary that Rainn Wilson, who played Dwight from The Office, produced about Shane's life.

The couple's relationship has since grown where they now run a YouTube account entitled Squirmy and Grubs to better educate people about their interabled relationship.

Hannah, who's currently a senior at Carleton College in Northfield, Minnesota, never mentioned Shane's disability when she first emailed him three years ago while he was living in Pennsylvania.

In the email, she complimented Shane, who writes books and attends talks about his disability, on his sense of humor and his writing before admitting she thought he was very cute.

'I knew right away that I needed to know this person,' Shane said.

'I’ll never forget the way my heart felt so light and beat so rapidly as I willed my atrophied fingers to type out a response as quickly as they could manage.'

The relationship blossomed to include long FaceTime calls and text messages until both realized they were very much in love with each other.

Hannah visited Shane first in Pennsylvania where they spent four days getting to know one another. Both then realized they wanted to make a long distance relationship work.

In 2018, the couple moved in together in an apartment in Minneapolis, Minnesota, so Hannah could finish up her final years at her university.