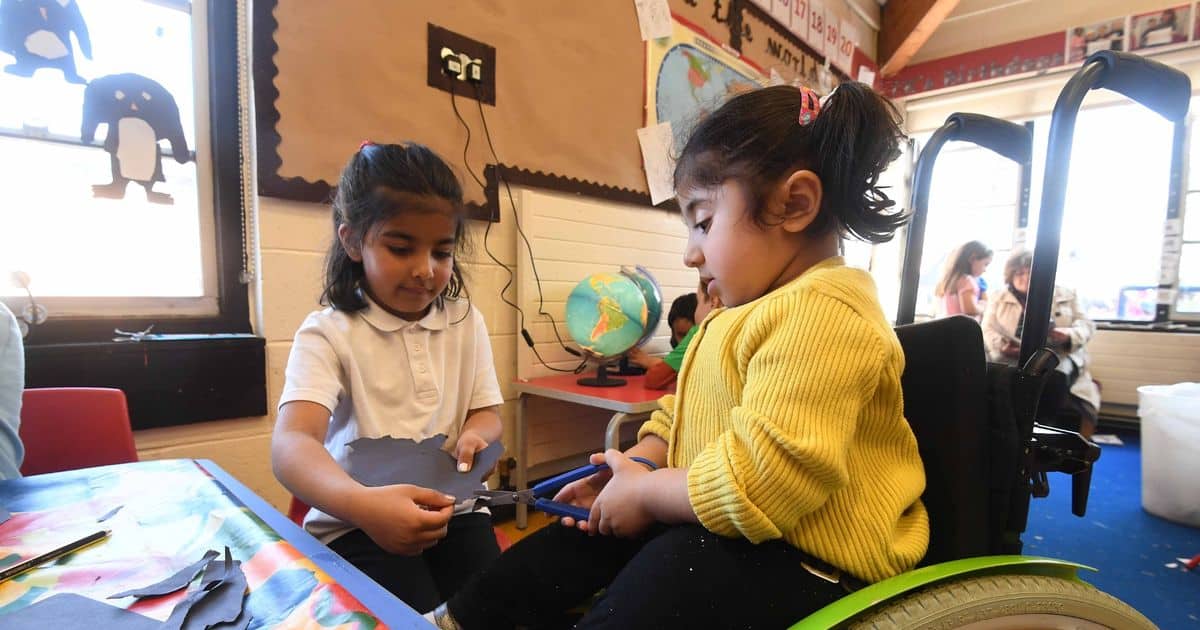 Disabled kids and their parents at a Birmingham primary school have made a heartbreaking plea for extra funds so they can stay at the school they love.

Aaron, Raheem and Rahimah are among 12 boys and girls with physical disabilities who attend Kings Heath Primary School.

But despairing school leaders are having to contemplate the “unimaginable” prospect of axing the provision because they don’t have enough money to keep it going.

Dad Abdul Habib, whose children Raheem and Rahimah use wheelchairs like him, is demanding a rethink and calling on the Government to properly fund special needs education amid a national crisis.

He said: “My children could be excluded and segregated off from their friends just because they are disabled, like I was as a child. That cannot be right.

“They deserve the same chances as anyone else and if this Government really cared about people like us they would fund this provision properly.”

The furious dad, who like his kids has brittle bone disease, said: “When I heard the school might have to do this I was angry, annoyed, frustrated - my first thought was that disabled people are being picked on again.

“Go and pick on some other group. We get the worst deal of all anyway.”

Mike and Sam Fenton, whose son Aaron has cerebral palsy, said it would be a heartbreaking loss for the children and families affected and the rest of the community.

“This is a genuinely inclusive school – tolerance and acceptance comes naturally to the kids because they are around difference every day. Losing that would be catastrophic,” said Mr Fenton.

“It is immensely frustrating and sad that places for our son and his friends could be in jeopardy.”

School head Shirley Hanson said she is “distressingly” having to consider closing the specialist resource base for children with physical disabilities. It's one of five similar bases at mainstream primary schools in the city.

'It is a shocking and awful option to even think about but we can’t see any way forward.'

"We are trying everything to prevent this happening,” said the clearly distraught head teacher.

“It’s unimaginable and I don’t quite know how I would see it through, but the funding is just not there.”

Chair of governors Penny Colbourne added: “We are being asked to make impossible choices and impossible decisions.”

MP Jess Phillips, whose 10 year old son Danny is a pupil at Kings Heath, has taken the fight to the heart of Westminster.

She said loss of the provision would be akin to ‘social cleansing’ of disabled people.

She has threatened to take a coach load of kids to the heart of Westminster to protest the funding cuts – and on a crowdfunder page to raise funds for the campaign she writes:

“My son's school can no longer afford to fund the support needed for the disabled children so they may have to leave their school. Yes, you read that right - disabled people are being cleansed from our schools by cuts.“