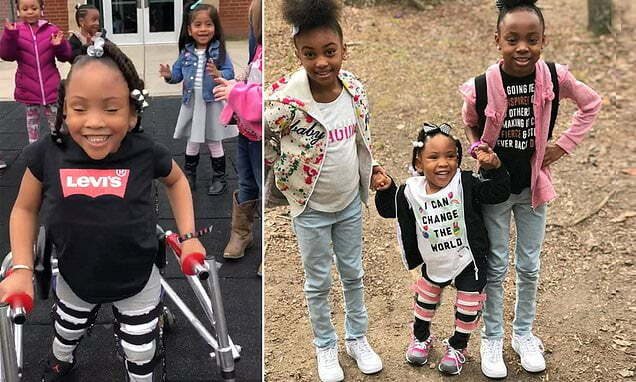 This is the heartwarming moment a little girl living with spina bifida walked for the first time and had the support of her classmates cheering her on as she took those all-important steps.

A clip shared on the Facebook page of Yvette BlaqueVette Parker shows the four-year-old assisted by a frame as she makes her way across the playground and she can't help but giggle with glee as her pals chant her name.

'Kenydii!' they sing in unison as the adorable North Carolina child demonstrates her new independence for the boys and girls in her class.

Posted a week ago, by Wednesday, the clip shared by her aunt Yvette Parker – a parent-of-five – had reached almost 5 million views and garnered over 100,000 shared.

'Yay girl, look at you go! They're cheering for you!' a voice from behind the camera is heard encouraging a thrilled Kenydii.

The proud relative captioned the video: 'Today starts Day 2 come on my luv you got this #Never say never #GOD has the last word. This is truly the happiest day of her life.'

They were able to purchase a walker with the help of a GoFundMe page that had raised $1,092 of a $1,800 goal by Wednesday.

The page explained that Kenydii was diagnosed with Spina Bifida Myelomenigocele and Hydrocephalus at 18 weeks and 5 days and when she was born she had spinal repair and a VP shunt placed.

She was also diagnosed with Neurogenic Bladder/Bowel and doctors told her parents she would never walk or be able to use the bathroom on her own.

The crowdfunding page stated: 'But GOD is saying different at this point we are raising money for a walker to help her stay balanced with her leg braces as she start her journey to walk.'

PrevPreviousMindfulness and Perspective: The Tools I Rely on While Living with MS – Multiple Sclerosis News Today
NextBeing confined to a wheelchair has not stopped this Leicester globetrotter from visiting 35 countries – Leicestershire LiveNext