22, who lost the ability to speak after a crash talks in his native Black Country accent – Daily Mail

22, who lost the ability to speak after a crash talks in his native Black Country accent – Daily Mail 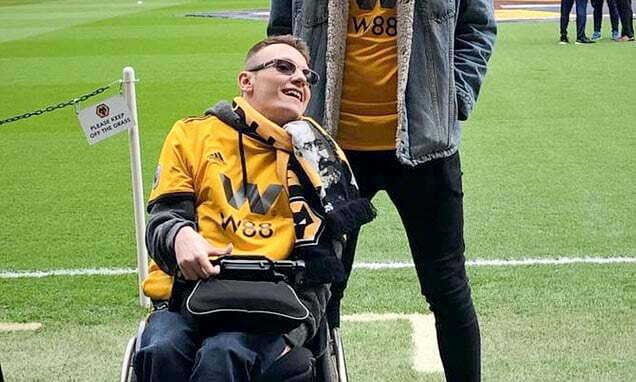 A man from Wolverhampton who lost his voice as a child has been able to speak again in his Black Country accent, with the help of a special voice computer.

Jack Smith, 22, had been using equipment that generated a 'posh and boring' voice that he felt did not represent his Black Country roots.

His new voice was created thanks to hundreds of recordings from a volunteer with an accent similar to Mr Smith's that was fed into communication software.

Mr Smith's new accent was showcased to his favourite football team when he read out the names of Wolves players at a Premier League match they won.

Jack Smith was forced to use a 'posh and boring' robotic standard generated communication aid throughout his childhood after a car crash paralysed him and robbed him of his ability to talk.

But he always felt part of himself was missing, and went on the BBC's The One Show to appeal for viewers to help him regain his true accent through his communication device.

He appeared on the show with three other students who all want wanted regional accents but found few age-appropriate regional voices for their communication devices.

Customisable voices are available for purchase from private companies but can be expensive with certain options costing hundreds of pounds online.

After a number of volunteers came forward, Mr Smith chose the a man called Jack McBride, an actor and forklift truck driver was one of five people who auditioned.

Mr Smith liked his voice the best, so the 23-year-old then attended National Star College to have it recorded.

Mr Mcbride recorded over 600 phrases in his own Black country dialect for Mr Smith's device.

Mr McBride said: 'I had seen The One Show were looking for to record someone with a Black Country Accent for a project.

'I applied and auditioned, It was a bit like the voice - Jack and some others listened to me talk and Jack liked my voice the most so I got the offer to do it.

'I felt bad for the recording staff, as the first time the day we did it the recordings didn't work so they had to get me back in and listen to my voice again all day.

'I hadn't even thought about people with communication aids losing their accents, it really made me think, and I think It's really given Jack his character.

'It was for a good cause, so I was happy to do it, and his family are lovely.

'Jack's dad called me to thank me for what I had done for his son, but it was a pleasure.'

PrevPreviousMother-of-two, 51, is living on a knife-edge with rare genetic condition – Daily Mail
NextRochester Down Syndrome model melts hearts in adverts for brands including Mothercare – Daily MailNext